How Predictable Is the Operative Time of Laparoscopic Surgery for Ovarian Endometrioma? 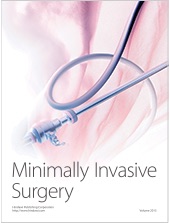 Abstract
Endometriosis is a tricky albeit common disease whose management largely relies on laparoscopy. We have studied the operative times of laparoscopic endometrioma surgery in order to assess their predictability and possible predictors. One hundred forty-eight laparoscopies were included, with a median operative time of 70 minutes (mean 75.14; 95% CI: 70.03–80.24). Half of the cases had a duration within 15–20 minutes above or below the median (IQR: 55–93.75), but the whole dataset ranged from 20 to 180 minutes, and the standard deviation was relatively large (31.4). Surgical times were significantly related to technical (number and size of the cysts) and nontechnical factors (age, parity, dysmenorrhea, and family history). At multiple logistic regression, after adjusting for number and size of the cysts, surgical times below the first quartile were associated with older age (>30 years old: aOR: 3.590; 95% CI: 1.417–9.091) and parity (?1 delivery: aOR: 3.409; 95% CI: 1.343–8.651). Longer times, above the third quartile, were instead predicted by a familial anamnesis of endometriosis (aOR: 3.639; 95% CI: 1.246–10.627). Our findings indicate highly variable surgical times, which are predicted by unexpected nontechnical factors. This is consistent with the complexity of endometriosis and its treatment. Productivity and efficiency in endometriosis surgery should focus on the quality of healthcare outcomes rather than on the time spent in the operating theatres.
Keywords: endometrioma, endometriosis, laparoscopy, patient-centred care, operative time, efficiency

Note
This study was based at the Institute of Obstetrics and Gynecology, Catholic University of the Sacred Heart, Rome, Italy.

Copyright © 2015 Pietro Gambadauro et al. This is an open access article distributed under the Creative Commons Attribution License, which permits unrestricted use, distribution, and reproduction in any medium, provided the original work is properly cited.

Full text available at:
Minimally Invasive Surgery: How Predictable Is the Operative Time of Laparoscopic Surgery for Ovarian Endometrioma?